(A more general overview of my thesis can be found here.)

Numerical simulations of the binary-disk interaction predict that the accretion rate onto the stellar surface(s) will be modulated by the binary orbital period. Orbital dynamics influence the flows of circumbinary and circumstellar material that, depending on the binary orbital parameters, can lead to periodic enhanced accretion events. The animation to the right is a simulation of the binary-disk interaction for an equal-mass binary with an eccentricity of 0.5. The simulation comes Munoz & Lai 2016. The color scheme presents the logarithmic surface density with high densities in white and low densities in black.

In a simplistic summary, the binary orbit clears out a central gap creating a circumbinary disk and a circumstellar disk around each star. As this eccentric binary goes through its orbit, apastron passage (furthest separation of the two stars) induces a stream of circumbinary disk material that crosses the cleared gap, feeding the circumstellar disks. The figure below presents the mass accretion rate from this simulation where bursts of accretion are seen proceeding each periastron passage (closest approach of the two stars).

The predicted time-variable accretion is most extreme for eccentric, equal-mass binaries. The specific phase, duration, and amplitude of periodic enhanced accretion events depend sensitively on the binary orbital parameters. If the behavior depicted by these models is accurate, they carry many implications for the formation of stars and planets in the binary environment. Confirming the binary accretion model requires demaning observations that had not been obtained before our work.

To test the predictions of the binary-disk interaction, we have conducted a long-term photometric monitoring campaign capable of tracing the time-variable accretion behavior of short-period, pre-MS binaries. We have compiled a sample of nine short-period binaries with diverse orbital parameters allowing us to not only search for evidence of periodic enhanced accretion events but also test their orbital parameter dependence. They have orbital periods spanning 2 to 90 days and eccentricities from 0 to 0.63.

With the Las Cumbres Observatory (LCO) global telescope network, we are able to observe our binaries at cadences and over time periods that previously could not have been achieved from a single observing site. For each binary we created a custom observing program that provided 20 observations per orbit for 10 consecutive orbital periods. Our observations were taken in broadband UBVRIY and narrowband H-alpha and H-beta filters. Most crucial for our work is the inclusion of U-band, which can be used to determine the accretion rate.

At the same time, we had queue-scheduled observations with the SMARTS 1.3m telescope obtaining BV and JK images for a subset of our binary sample. The optical data provide an indirect measure of the accretion luminosity while the near infrared photometry traces the amount and temperature of circumstellar dust.

With our observations now complete, we have focused on the eccentric binaries in our sample, DQ Tau and TWA 3A, where the level of accretion variability is predicted to be highest.

DQ Tau is an equal-mass, pre-MS binary with an eccentricity of 0.57 and an orbital period of 15.8 days. 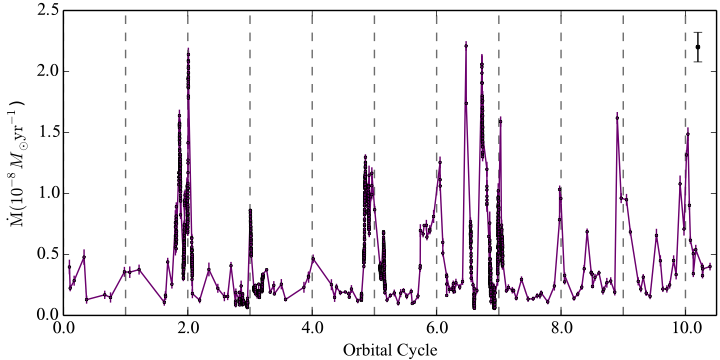 The figure to the right presents the mass accretion rate as a function of orbital cycle. The accretion rate is derived from LCO U-band observations (additional high cadence observations were made with the APO ARCSAT and WIYN 0.9m telescopes). The vertical dashed lines mark periastron passages. Although there is a significant amount of variation from one orbit to the next, we find consistent accretion events near periastron passages, just as the models above predict. A Fourier analysis of these data finds periodicity in the accretion rate matching the orbital period. 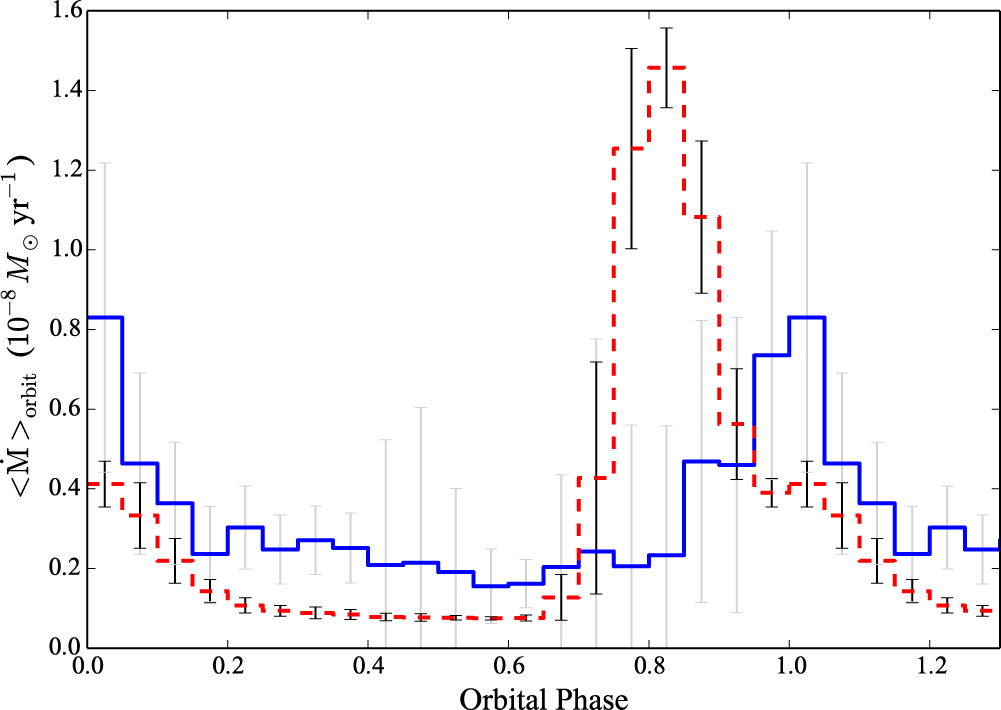 To more readily compare our observations to the results of numerical simulations, we derived the median accretion rate as a function of orbital phase. The figure on the left presents DQ Tau’s median accretion rate in blue and the results on the Munoz & Lai 2016 simulation in red. Good agreement exists in that both are periodic and have a similar average burst durations, providing strong evidence for periodic stream-fed accretion events.

The differences between the two, most notably the phase shift between the accretion peaks and large amount of variability observed, point to limitation with current modeling efforts. We believe the main source of discrepancy between models and the observations of DQ Tau has to due with the impact stellar magnetic fields have on accretion flows. (No model of binary accretion currently includes stellar magnetic fields.)

Low mass stars have strong magnttic fields that are capable of disrupting disk material near the stellar surface. Single stars are typically assumed to have a magnetically dominated region within ~5 stellar radii where magnetic fields confine accretion flows, funneling them onto the star at magnetic foot-points. The orbit of DQ Tau brings the two stars to within ~12 stellar radii of each other, making it unlikely that each star is able to host a circumstellar disk like the models suggest. Without circumstellar disks (i.e. without a reservoir of material near each star), accretion events become sensitive to the timing at which circumbinary accretion streams supply material to the central stars, delaying accretion events as compared to models. Although these models are not an ideal match to DQ Tau, they are likely to be more representative of wide binaries with stable circumstellar disks.

We are currently investigating the role circumstellar disks play on the timing and variability of binary pulsed accretion events in collaboration with Diego Munoz. More about that project can be found here.

A link to the peer-reviewed paper on DQ Tau can be found here.

An animation of DQ Tau’s accretion rate as the stars move through their orbit can be found here. 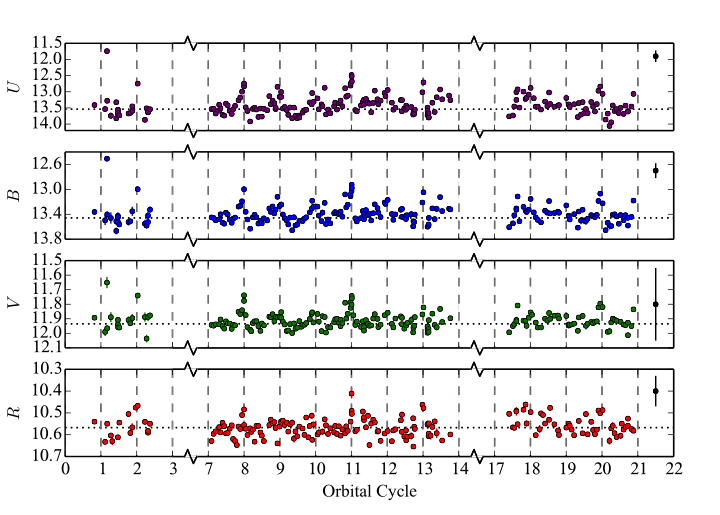 The figure to the right presents our UBVR lightcurves from LCO and SMARTS. Typical of accretion, the amplitude of variability is larger in the blue (top) filters than the red. As with DQ Tau, we see persistent brightening events near periastron passages (dashed vertical lines). 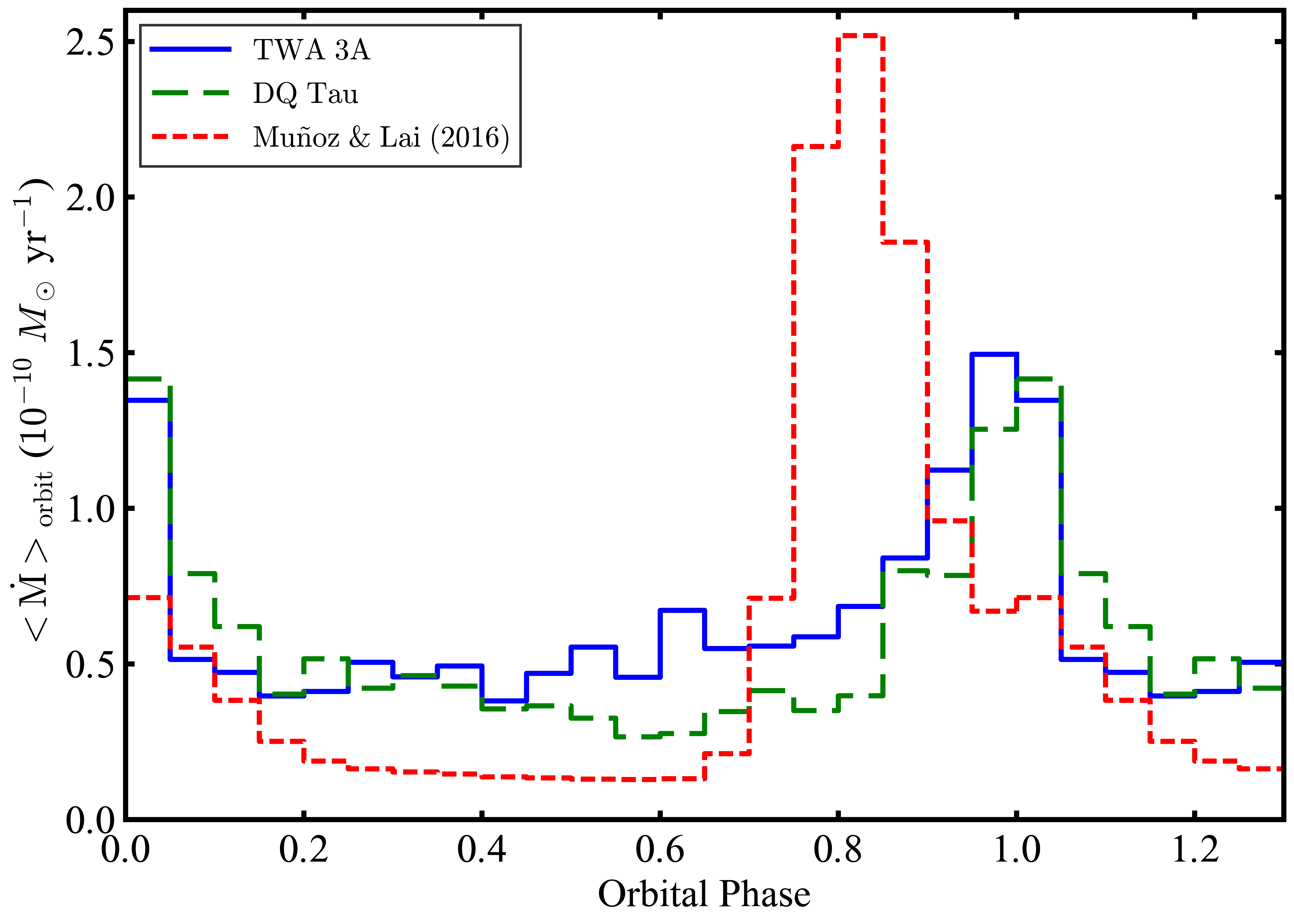 Again computing the median mass accretion rate from the U-band, we compare TWA 3A to DQ Tau and the hydrodynamical simulation above. The DQ Tau and TWA 3A accretion profiles are remarkably similar. We note that TWA 3A shows much less variability from orbit to orbit than DQ Tau. This may be due to its lower overall accretion rate.

TWA 3A is one of the binaries in our sample for which we have overlapping time-series spectroscopy. You can learn more about that project here.

An animation of TWA 3A’s accretion rate as the stars move through their orbit can be found here.

A link to the peer-reviewed paper on TWA 3A can be found here.

We are currently working through the data on our 7 remaining binaries. A publication describing the full sample, including the near-infrared photometry is now in preparation.